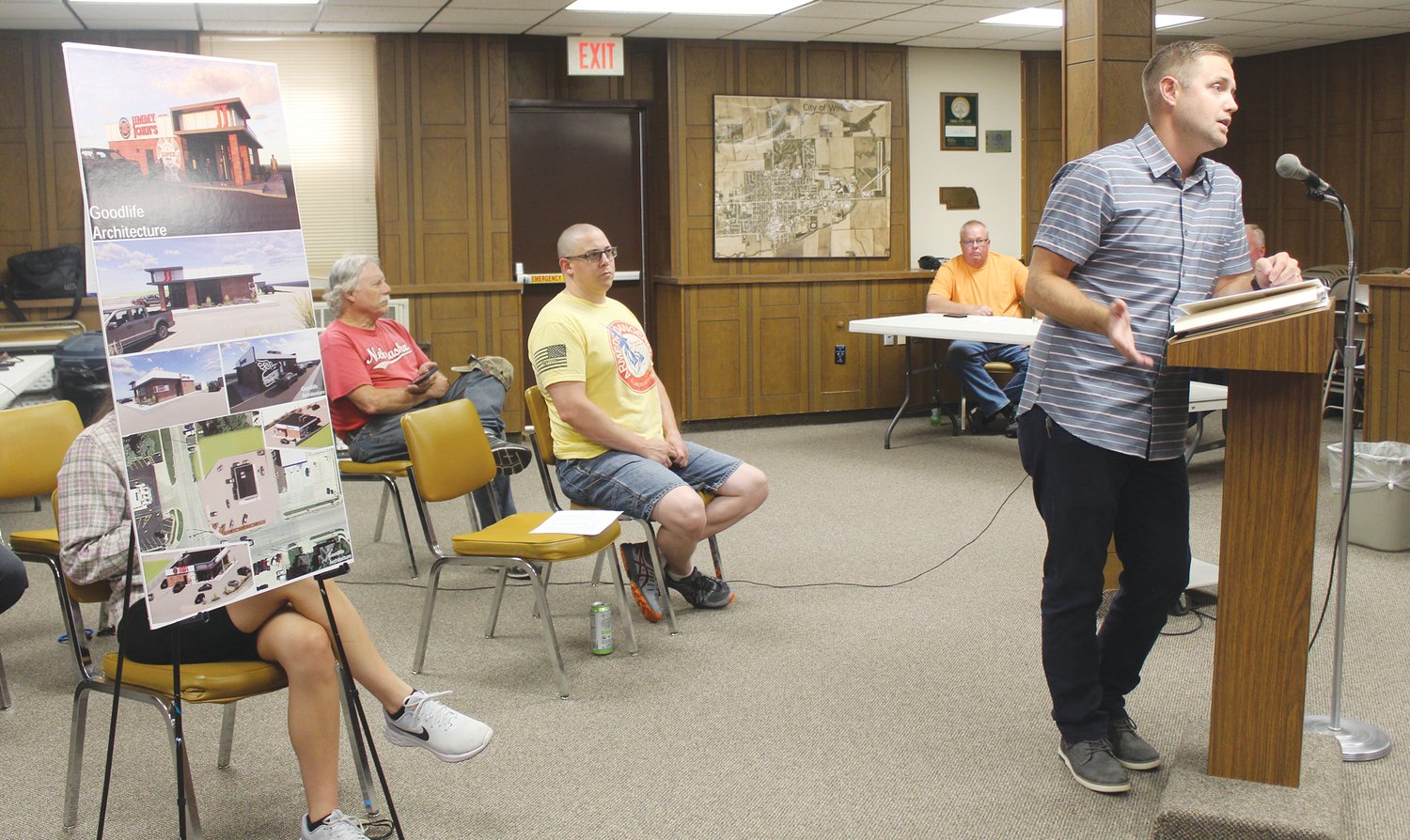 Sam Nixon spoke to members of the Wayne City Council on plans to bring a Jimmy Johns franchise to Wayne. The business will be located at the corner of Seventh and Main Streets.
Clara Osten
Posted Thursday, June 23, 2022 9:55 am
Clara Osten

Four public hearings and the reading of six ordinances were part of Tuesday's meeting of the Wayne City Council.

No one from the public spoke during any of the hearings.

Ordinances related to the annexation of each of these parcels received first reading approval and will be brought back before the council for second and third readings at future meetings.

Sam Nixon with Nix Wayne, LLC spoke to the council on a request for a $300,000 loan from the LB840 Revolving Loan Fund. The money would be used to renovated the former bank building at the corner of Seventh and Main to bring a Jimmy Johns franchise to Wayne.

Nixon presented drawings of the changes planned for the building and information on a timeline for bringing the franchise to Wayne.

Prior to Tuesday's council meeting, the LB840 Revolving Loan Fund Review Committee had approved the application for the loan and recommended a 10 year loan at one-half the interest rate from the traditional lender. The recommendation was 2.3 percent.

Nixon requested the interest rate on the loan be lowered to one percent. The savings would be used for additional staffing salaries.

Following the presentation and council discussion, council members voted to approve the loan application at a one percent interest rate.

During Tuesday's meeting, council members voted unanimously to compensate Joe Gubbels $400 for damage done to a fence on his property.

Gubbels came before the council at the last meeting to request a cost share of 25%, up to $1,500 for the fence. He told the council at that time that the Wayne Pedestrian Trail runs along three sides of his property.

Council members debated whether some type of vegetation could be put between the fence and Gubbels property. However, the time it would take to get the vegetation to be tall enough to provide any type of privacy to the homeowner would be quite lengthy.

In other action, council members approved a resolution in regard to the City Administrator's Contract.

A resolution was approved accepting the bid and awarding a contract for the Wayne Lincoln Street Improvement project.

Taylor Kube with Olsson told the council that one bid had been received for the project but that the unit price was comparable with estimates. He recommended the bid of $224,429.00 from Robert Woehler & Sons Construction, Inc. be accepted.

Approval was given on Payment No. 1 in the amount of $15,750.00 to Robert Woehler & Sons Construction, Inc. for work on the Chicago Street Improvements Project.

An ordinance on Tuesday's agenda dealt with the release and abandonment of a 12 foot utility easement located between Lots 1A and 1B of the Corrected Administrative Replat of Lots 1 and 2 of the Amended Plat of Tuffern Blue Estate Subdivision.

The request was made by Lucas Thompson who plans to turn the two lots into one. There are no utilities in the easement at the present time.

The final ordinance on the agenda was the third reading of Ordinance 2022-7, which amends the city Zoning Map in regard to three lots on South Lincoln Street.

Budget work sessions will be held Tuesday, July 19 and Tuesday, Aug. 2 following regular council meetings. Council members will be working on the 2022-2023 city budget, which will begin Oct. 1, 2022.

The Wayne City Council will next meet in regular session on Tuesday, July 5 at 5:30 p.m. in council chambers.