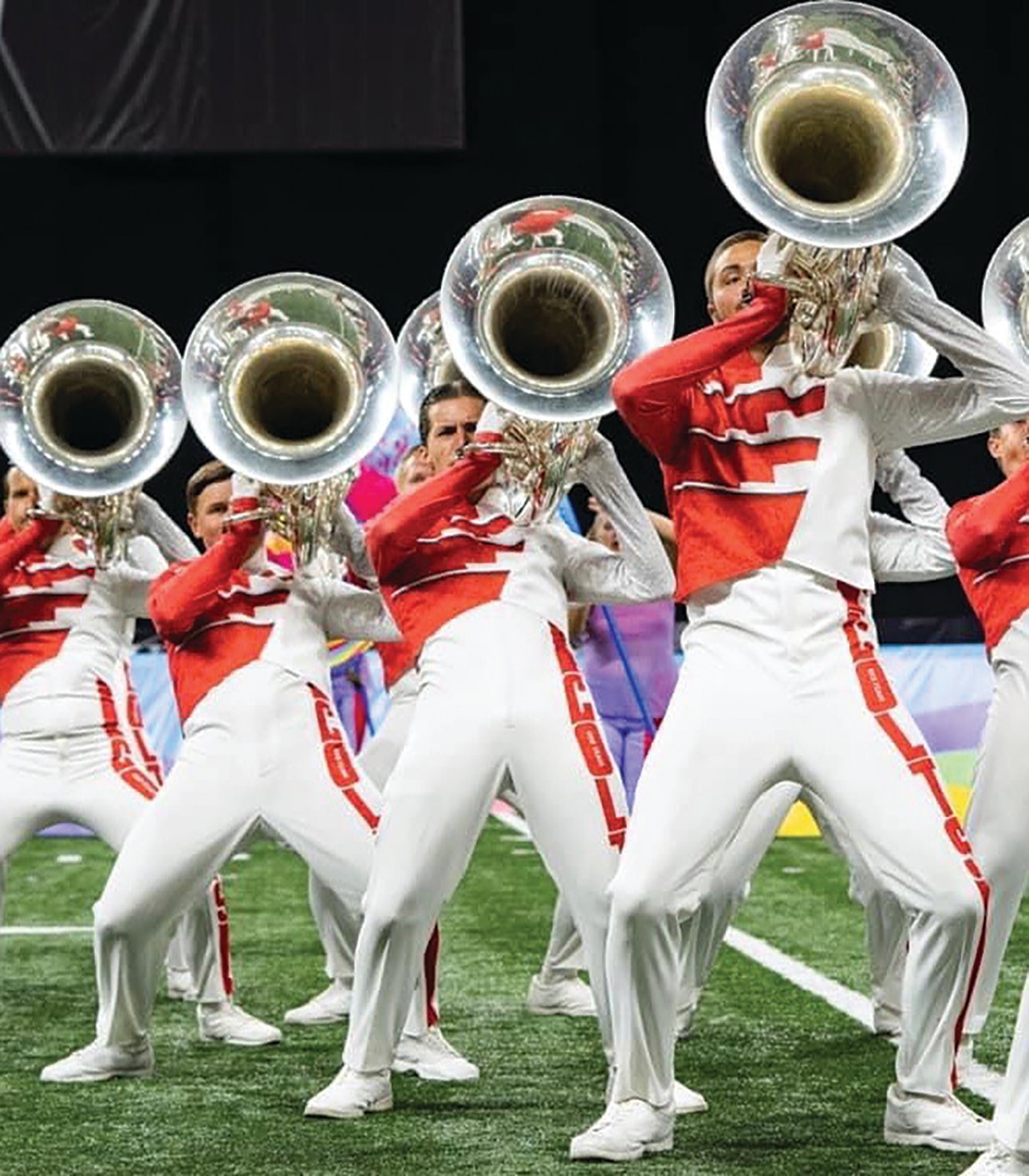 From middle school to college, music has held a prominent spot in Kiernan Baker's life. Due to his love of music, he has been able to participate in Drum Corps International with the Colts.

Baker was first interested in music after being influenced by his mother, grandmother, and sister. When starting middle school, his sister was very involved with vocal music and wanted Baker to participate in it as well.

"I kind of had a want to do band but then choir was another thing that I got pushed into," Baker said.

In Baker's freshman year, the band director inspired his love for music. Baker said the band director was one of the best music teachers that he has seen. At the end of his senior year, Baker didn't know what he wanted to go to college for at first.

"I was like 'I have no idea what I want to do still but what's one thing that I like?' and I said music," Baker said. "I thought I could teach music and I've stuck with it for three years."

Baker mainly plays the euphonium and is the current drum major for the Wayne State marching band. He also plays the piano, trombone, and tuba for a small amount of time.

The Drum Corps International (DCI) is an entity that supports numerous programs around the globe while sanctioning participating recognized drum corps, SoundSport performance ensembles and DrumLine Battle teams performing in more than 100 competitive events that make up the annual Drum Corps International Tour. Baker is part of the Colts, which is one of the participating organizations in the DCI and has been around since 1963. They are located in Dubuque, Iowa.

"The Colts were the closest group," Baker said. "I could tell immediately that this special and a place that I could really see myself thriving at. Luckily I was selected after two audition camps."

At the audition camps, everyone is usually split up into different sections depending on their instrument. Participants mainly learn the technique that the corps does, the drills that they do and the show music. The show music is given to the ones the corps believes they can trust.

"It's a good little look into what the summer is like because it's basically just what we do for 30 days in the spring training," Baker said. "Just keep doing it over and over again until it's near perfect."

Baker marched that same summer that he joined the group and was meant to march in 2020 but couldn't due to COVID-19 shutting everything down. He originally decided against marching in 2021 for his mental health and COVID-19 but halfway through July there was a hole in the tuba line that needed to be filled. Baker filled in and marched for 25 days due to the short summer and no competitions. He plans to march this summer and will leave May 27 to move in.

The Colts will be doing their spring training somewhere in the area of Dubuque. All of June will be spent learning the show, drill, etc. and will start their tour in July.

"We'll start locally and then spread out to the Midwest," Baker said. "Then we'll go down to Texas, across to Georgia and then back up the east coast and finish in Indianapolis."

There is an age out rule for the Colts that stops at 21 unless someone turns 21 after June 1 when the season starts. Baker's birthday is June 26 so he will have a bonus year to still participate if his body allows him to do so. Baker said he might teach it after he is done or volunteer to help so that he is still involved in some way.

"I definitely feel like I'm a different person than I was coming into drum corp," Baker said. "That could just be the shift from high school to college but it really teaches yourself how to make sure you're okay before you try and take care of others. Just make sure that you are thriving where you are at. I've also gotten really good at just traveling lightly since we're bouncing from place to place every other day."

The DCI main website has a list of the different participating corps and audition information for anyone that is interested in applying. Baker said that you have to put yourself out there and take the firrst step in going to audition camp.

"You do have to pay money to do this which is the one downside for drum corps I would say," Baker said. "It's a fair thing because of how much you have to travel and how much gas for buses is right now so it makes sense that you would have to pay to participate."

Baker said he has a very strong support system with his parents. They understand his love of music and the opportunities that Baker can have in his music educator career from this. During his first summer in the Colts, his mom drove him the 12 hours to camp while being a teacher.

"My dad actually bought an RV in the 2019 summer and followed us around in the Midwest so I think he just showed up at a show in Wisconsin and then just followed us until we got to Texas," Baker said. "It was just kind of cool to have him follow and to just see how much effort my dad and my mom put in is just really cool and I wouldn't be able to march in the corps without them."

Some of Baker's favorite moments in the Colts is the final performance they do.

Baker also met his current girlfriend while in the Colts and she is a member as well. He has made friends from all over the United States and finds it fascinating to make so many memories with the people in drum corps.

"That's what draws me back," Baker said. "Spring training is awful and I barely got through it my rookie year but just knowing that once July hits we'll get a little more free time. We get to spend more time with the friends and more comfortable with everything, we'll know the show and we'll all get in the same mindset going into it and that is what make it worth it. It's what drew me back last summer when I first decided not to march and then did."