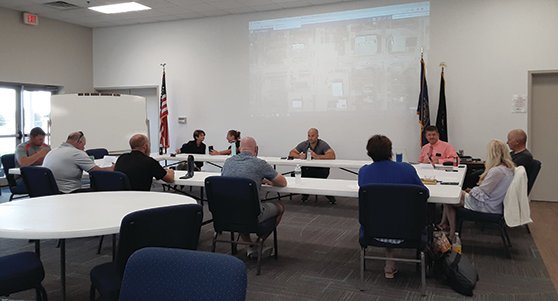 Updates on several items and future projects for the city of Wayne were discussed during a council retreat on May 31.

The meeting began with Casey Junck, Water/Wastewater Superintendent, updating the council on the work of his department.

He told the council that his department includes five full-time employees.

During the last year, the city pumped 293,626,000 gallons of water. This number was considerably higher than the previous year, in part due to the fact the city had to flush the water system several times in an attempt to get good water samples from the new transmission line.

Junck also talked about the possibility of purchasing chlorine in bulk if the city chooses to continue to chlorinate the water in the future. He presented some preliminary cost estimates for doing so and explained what work would need to be done.

Another item Junck discussed during the retreat was private sewers in the city.

He listed a number of areas within the city that are serviced by private sewers and said that he doesn't know when these were installed and said most of the homeowners affected are unaware of this.

"I would rather deal with these situations ahead of time, rather than when there is an emergency," Junck said.

Council members said that a decision will need to be made on how to deal costs of making the necessary changes.

Considerable time was spent during the retreat on the topic of sidewalks, extension of sidewalks in certain areas and possible changes in the city's trail system.

One of the areas under discussion is along the north side of Highway 35 from Greenwood Cemetery to Pheasant Run. It was noted that many people walk along the highway to get to the businesses on the west side of Wayne.

Several other areas in the city were also discussed as possible locations for sidewalks.

Discussion centered on how to go about determining the best location for the sidewalks, how to cover the costs and plans moving forward.

The council directed city staff to get an engineer's estimate and determine whether the project could be paid for with a Public Works Grant.

City Administrator Wes Blecke updated the council on the results of the recent election in regard to sales tax issues.

The retreat concluded with each of the council members listing future priorities and projects they felt were important.

Among those was the future of the current City Hall. A number of possibilities were discussed and additional input will be gathered.

The Wayne City Council will next meet in regular session on Tuesday, June 7 at 5:30 p.m.