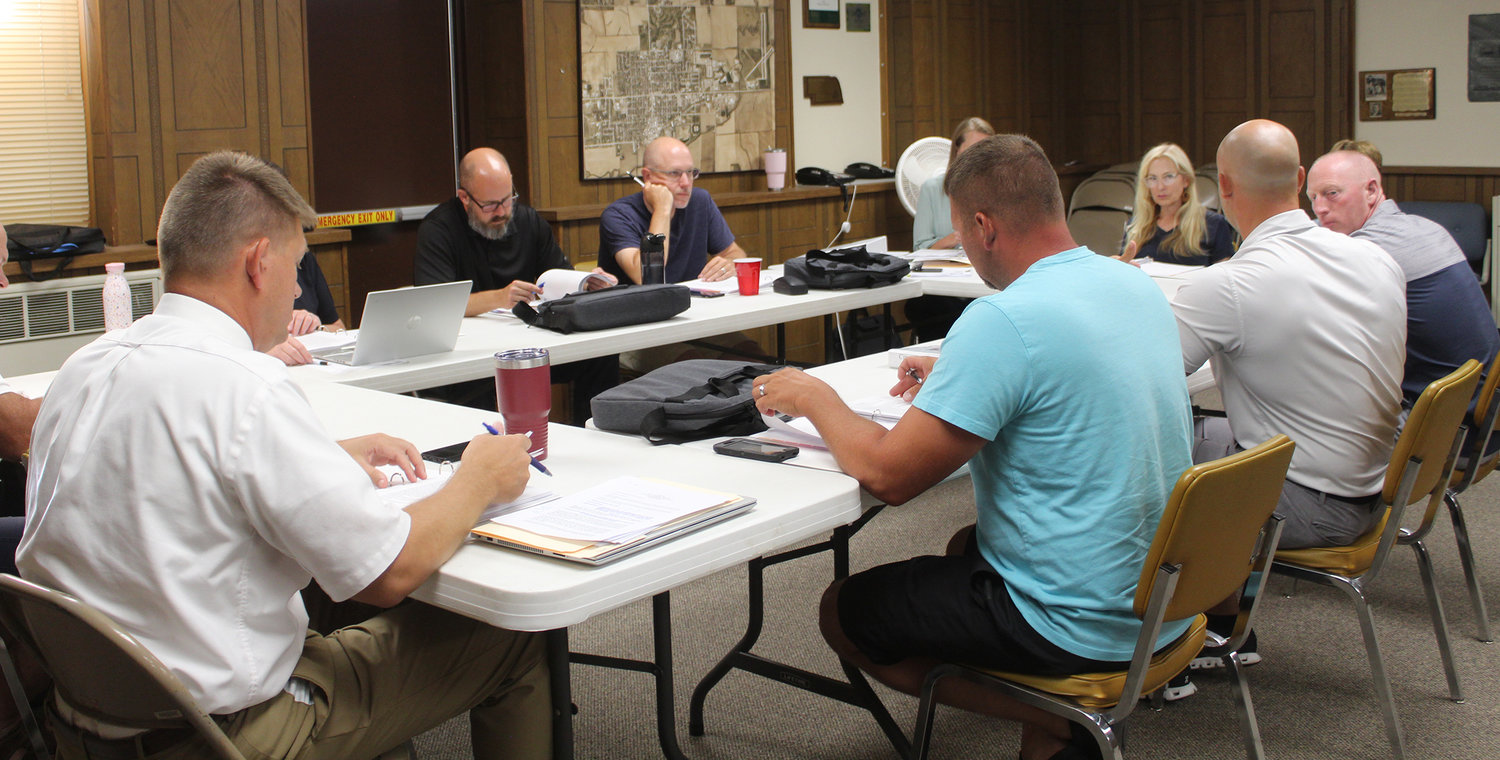 Council members conducted a budget work session during Tuesday's meeting as they work on the fiscal year budget for 2022-2023
Posted Thursday, July 21, 2022 10:17 am
Clara Osten

Four public hearings were on the agenda when the Wayne City Council met in regular session on Tuesday.

The first of these was in regard to a request to amend the city code for minimum off-street parking and loading requirements.

City Planner Joel Hansen shared information on the history of off-street parking requirements in the various zoning districts. He said that several years ago numbers were adjusted to make it easier to determine how many parking spots were required in R-4 (multi-family) districts.

Lee Brogie spoke to the council and said she felt that all structures should be treated the same in all districts.

Following public hearing council members voted unanimously, and waived the three readings, of an ordinance to amend the city code to require 1.25 parking spaces per sleeping room in the R-4 Districts in Wayne.

The second public hearing involved the approval of the Redevelopment Plan for the R. Perry Construction, Inc. Project.

City Finance Director Beth Porter gave background information on the TIF process and noted that the issue has been before the Community Redevelopment Authority (CRA) and Planning Commission and will go back to the CRA again to be put in  a contract and bonds issued.

BJ Woehler told the council he had objections to the TIF application, noting that R. Perry had used the wrong application, city staff had confused the Planning Commission and the contract has no plan for developing a lake in the area. He said the purchase agreement had expired and was therefore invalid.

Lee Brogie listed three concerns she had with the plan. These include how it deals with blight/substandard conditions, the lake project, which was not part of the original plan and the increase of traffic in the area.

Brooke Sturm, who lives in the area adjacent to the proposed project, said "we want affordable housing and this is not affordable. Also, traffic will be ridiculous in this area."

Council members did approve the resolution approving the plan as contained in the Redevelopment Contract.

A third hearing at Tuesday's meeting involved a request to rezone a parcel of property owned by Nick and Jessica Hochstein from A-1 Agricultural to A-2 Agricultural Residential.

Joel Hansen told the council that the property, which contains 10.02 acres, needs to be rezoned so it can be subdivided into smaller lots

Four ordinances dealing with the annexation of real estate into the city received three reading approval.

These have been brought before the council at each of the last two meetings and no changes or updates were made since that time.

Council members approved a Certificate of Payment No. 2 in the amount of $72,103.00 to Robert Woehler & Sons Construction, Inc. for work on the Chicago Street Project. Work is progressing, although there have been some delays in receiving materials.

In other action, council members approved the mayoral appointments of Mark Sorensen, Jason Schulz and Jessie Piper to the Planning Commission.

The city has had an agreement with the business, which provides insurance for water lines from the street to the owner's property, for three years. Moving forward, information about the services will be on-line only and Wayne water customers will not be receiving information in the mail.

Mayor Cale Giese reminded council members there will be a Stool to Cool Task Force Open House on Tuesday, July 26. It will be held from 5:30 to 7 p.m. at the Wayne Community Activity Center.

City Administrator Wes Blecke told the council that a draft concept of what the area will look like will be presented. The public will be able to provide feedback before the design comes to council for approval.

Finance Director Beth Porter gave a general overview of the budget and explained how much she anticipated being in each department's budget by the end of the fiscal year, which is Sept. 30.

City Administrator Blecke said the budget would include a 4% increase in salaries for city personnel.

Discussion was held on the need to make improvements at the Wayne Community Activity Center and several of the city parks.

In addition, council members are working to lower the tax levy. The exact amount will not be determined until the city's valuation numbers are released in August.

The Wayne City Council will next meet in regular session on Tuesday, Aug. 2 at 5:30 p.m.