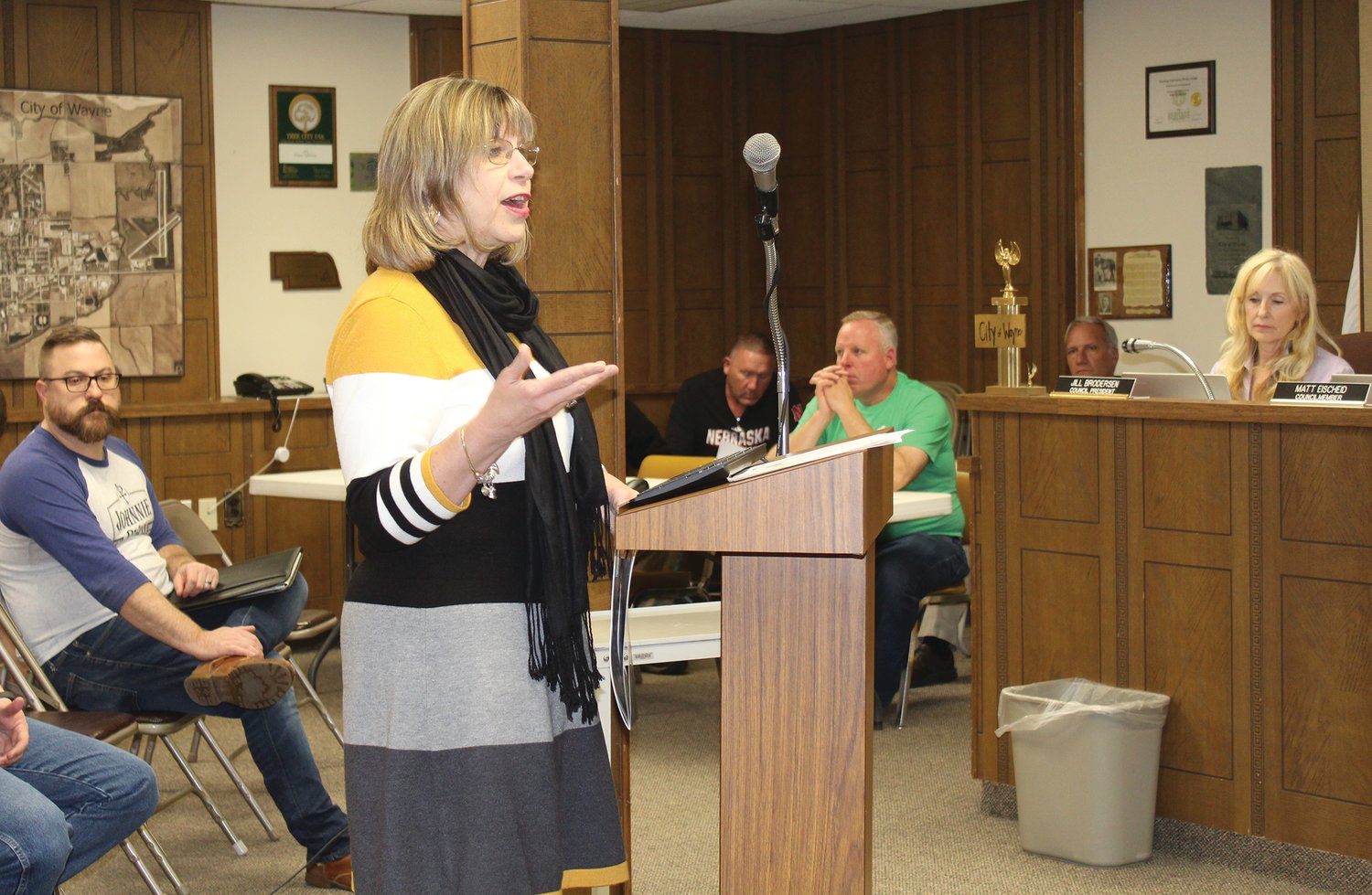 An overview of the strategic plan and a recap of the facility master plan for Wayne State College highlighted Tuesday's Wayne City Council meeting.

Wayne State President Dr. Marysz Rames spoke to the council on the strategic plan which focuses on the words "Inspire, Strengthen and Serve." She noted that this is the first time in over 10 years the plan has been updated.

She shared information on the college's goals and core values, along with providing data in regard to students served by the college.

Her second point was the facility master plan.

She discussed possible ways to "refresh the campus" and looked at two different parts of the campus.

Among the items on the list for the south portion of the campus is Berry Hall.

"Students want suite style living, not community bathrooms. Currently Berry Hall has 305 beds. Renovating the building into suite living would reduce that number to 125 beds. We are also working on the possibility of a new residence hall that would be financed with a public/private partnership," Dr. Rames said.

She also talked about other buildings on campus that would be a part of the master plan. These include Brandenburg, Connell and the Student Center in the south portion.

Work in several areas in the north portion of the campus has already begun, including upgrades at Rice Auditorium and other athletic facilities.

"We are also focusing on safety on campus and the traffic flow through the campus and working to create outdoor spaces for our students," Dr. Rames said.

She summarized her presentation by saying "we are excited about where we are going and these plans will drive us going forward."

Considerable time was also spent during the meeting on a proposal from Olsson to work with the Stool to Cool Task Force in regard to design work for the old lagoon area.

Council member Jason Karsky, who serves on the Stool to Cool Task Force, told the council the group has looked at other projects and said developing a Master Plan is the next step to keep the project moving forward.

The cost for the plan is $28,650 and will includes a 3-D plan rather than working off overhead maps. This is important, as there are significant grade changes in the area.

It is anticipated this process will take 8-10 weeks.

Council members also talked about a second phase to the process, a grading plan.

Preliminary cost estimates for this phase are $20,000. This item will be brought before the council at a future meeting.

Also on Tuesday's agenda was a public hearing and resolution in regard to an application for a Class Z (Micro Distiller) Liquor License for Johnnie Byrd Brewing Company.

Greg Ptacek, owner of Johnnie Bryd Brewing spoke to the council on the process the business has gone through in the five years the company has been in business. He explained that he had purchased a still and gone through the process of getting licensed by the state.

The license will allow for the production of vodka, gin, rum and whiskey.

Council members approved the resolution for the license.

Sievers told the council he has been on the Cobblestone license in the past and has recently returned to the community.

Following the hearing, the council voted unanimously to appoint the NED, Inc. board to evaluate applicants.

The grant funding will benefit low- to moderate-income persons in the community.

The Wayne City Council will next meet in regular session on Tuesday, May 17 at 5:30 p.m. in council chambers.