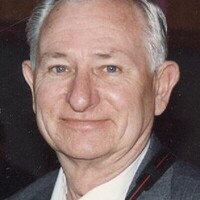 Keith was born Feb. 1, 1928 to Jerry and Mary (Hammermeister) Jech near Okarche, Oklahoma and was raised on a farm near Kingfisher, Oklahoma. Keith was fascinated with flying, studying aeronautics in high school. Following his graduation from high school, Keith joined the Army, serving in Japan after World War II. Keith graduated from Oklahoma State University in 1952 with a degree in agricultural education. He taught agriculture in high school at Ewing and Wayne, Nebraska, as well as Wayne State College.

Keith met Lois Jean Roenfeldt in Wayne and they were married on Nov. 14, 1954 in Stanton. They were blessed in their union with three children; a son, Kerry; and twins, Kevin and Kristy. Together, Keith and Lois spent free time boating, skiing, fishing, playing bridge and bowling. They were privileged to travel to 48 of the 50 states (excluding Hawaii and Florida), Canada, and spent a month in the Czech Republic.

Keith received his real estate license in 1958 and his Chartered Life Underwriter diploma in 1966. He sold both insurance and real estate, and, had an income tax business from 1958 until 2009. Keith loved learning about computers, being outdoors, and spending time on the upkeep of his bushes, flowers, garden, and more.

Keith was a member of Our Savior Lutheran Church, where he served in several capacities over the years. He is currently a member of the Lions Club, and a 65 year member of both the Masonic Lodge and Eastern Star.

Keith’s family would like to thank the following for their kindness and support - Providence Medical Center Hospice, Our Savior Lutheran Church, Kinship Pointe, his special friend, Judy Hermalbracht; and the Wayne Senior Citizens Center.