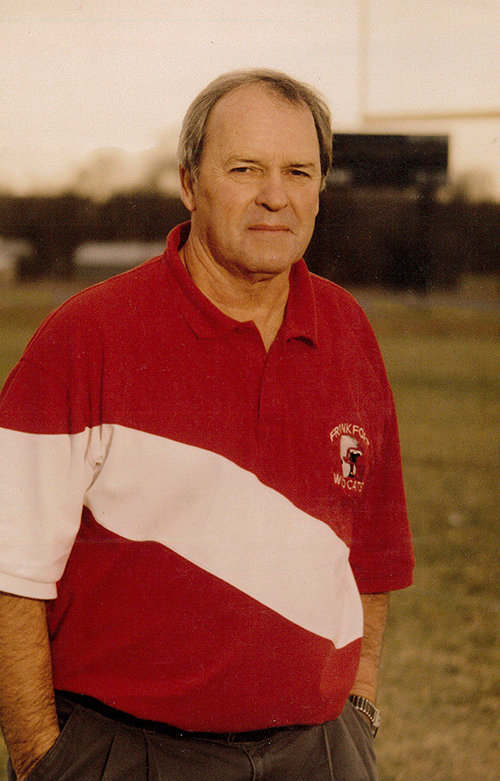 Arrangements are with Padden Funeral Chapel in Frankfort.

Larry was born April 29, 1936 in Wakefield,  the first of four children born to Maynard and Helen (Rahfaldt) Schroeder.  He grew up on the family farm south of Allen and attended country school, South Valley, until the eighth grade.  In 1954 he graduated from Allen High School. In 1958 Larry graduated from Wayne State Teachers College in Wayne, earning a bachelor’s degree in education.

Larry married Sally Lutt on Aug. 9, 1964 in Wayne. They were both heavily involved with school events, spending over 30 years teaching and coaching side by side at Soldier and Frankfort Schools. The state track meet was one event they always looked forward to attending with the students they coached.  Sally passed away from cancer in 1997.

Larry began his teaching career in Wisner, and then to Narka, Kansas. He moved to Soldier and taught and coached from 1962-1967, then moved to Frankfort.  He taught and coached from 1967 to 2000 when he retired from teaching.  He taught physical education, government, drafting and drivers’ education.  He continued to coach football and track and was the athletic director until 2004.  Larry led the 1983 and 1996 Frankfort football teams to State Championships and led the 1995 and 1998 teams to State Runner-Up titles.  He was the Manhattan Mercury Flint Hills Coach of the Year five times, in 1994, 1995, 1996, 1998 and 2003.  At the time of his retirement, Larry was the fourth winningest coach in the history of Kansas high school football.  He was inducted into the Kansas State High School Activities Association Hall of Fame in 2011.

In 2002, Larry married Vonis Behrends and they spent many years traveling, visiting places near and far, including Alaska, Germany, Ha Why Ah (Hawaii).  For 18 winters, he and Vonis would drive to Fort Walton Beach, Florida for the season. Larry enjoyed camping, hunting, and fishing, including summers at Milford Lake, hunting trips to Argentina and Wyoming and fishing trips to Canada.  In 2000, the local Civic Club named the Frankfort Field “Schroeder Field” after Larry and his late wife Sally, for their many years of dedication to the Frankfort schools. Larry was a member of Salem Lutheran Church, he enjoyed small town life, the coffee shop, driving around town, trips to the casino and spending time with his family.

Preceding him in death were his parents; wife, Sally; and brother, Ronnie.