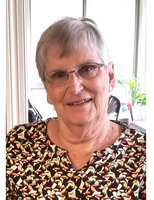 Memorials may be directed to The Jim and Vera Hummel Scholarship Fund/Wayne State College Foundation.

Vera Muree Churchill Hummel was born Aug. 14, 1938 in Woodbine Iowa to George H. Churchill and Ida Bintz Churchill. She was the youngest of 11 children.

She graduated from Woodbine High School and earned her bachelors and master’s degrees from Wayne State College. Vera married Jim Hummel on Dec. 28, 1958 in Woodbine Iowa. The couple lived in Mead, Nebraska for six years prior to moving to Wayne in 1964.

Vera retired in 2000 after serving as emeritus faculty at Wayne State College. She later served as a founding Director of Seeking the Spirit Within, the Nebraska Synod of the ELCA Institute of Spiritual Direction Formation; Spiritual Director; Spiritual Retreat Facilitator. She was a volunteer in hospice for many years; served as member of the Board of Trustees for Wayne State Foundation; served in many church roles at Our Savior Lutheran Church (organist, choir, council, committees).

She will be remembered as a loving wife, mother, and grandmother who shared her faith, integrity, love, and care for others.

She was preceded in death by her husband, Jim; parents, and 10 siblings: George, Lester, Ida May, Donald, Darlene, Gertrude, Fern, Paul, Raymond, and John, and a granddaughter, Courtney Nicole Hummel.