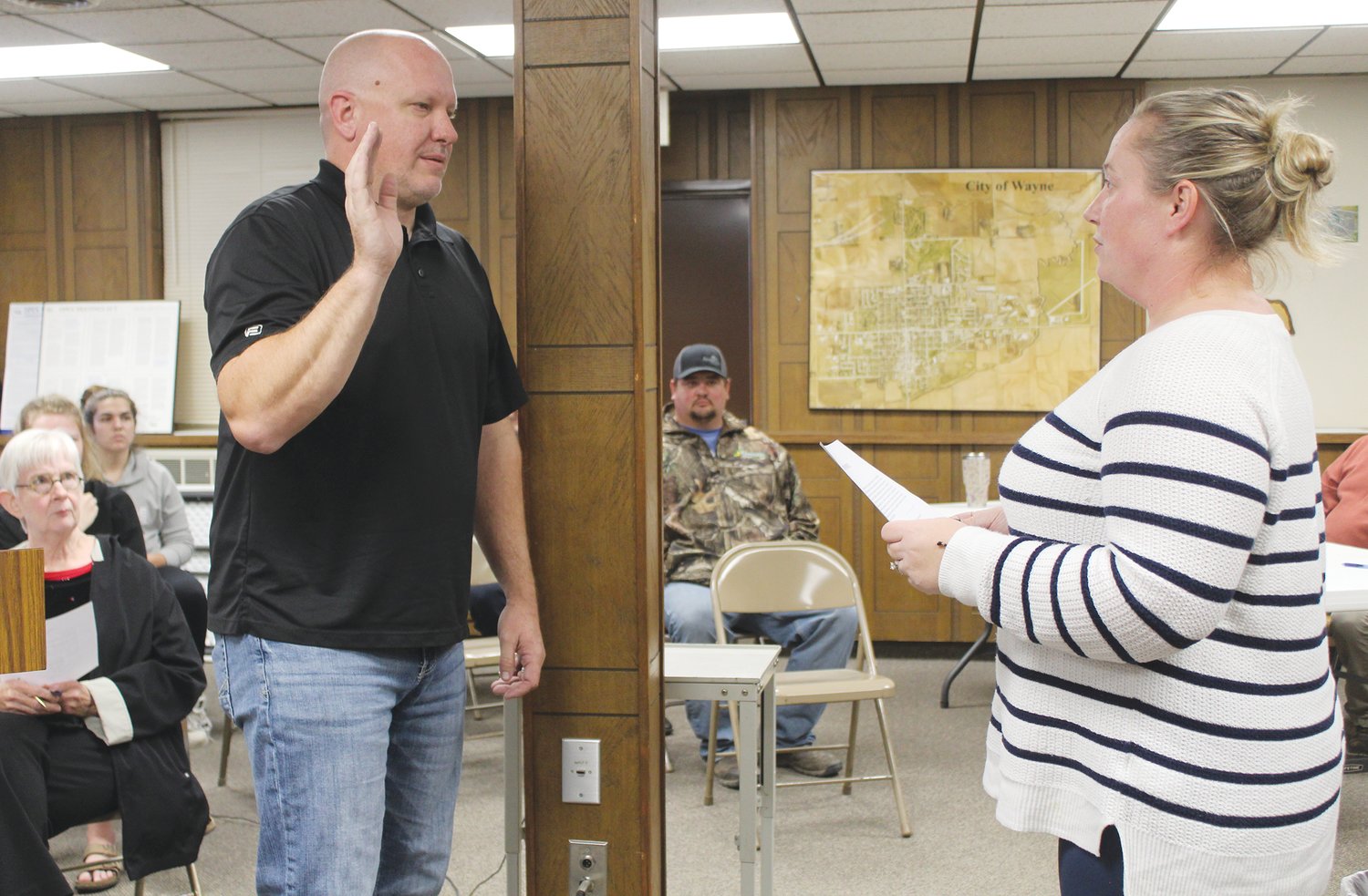 Sales tax uses, community re-development projects and representation on the city council were among the agenda items on Tuesday's lengthy City Council meeting.

For the second time in as many meetings, the meeting began with the swearing in of a new council member.

Dallas Dorey was selected to serve as the representative to Ward 3 (the northwest portion of Wayne).

He replaces Dwaine Spieker, who has moved out of the ward.

Following that the council spent considerable time debating whether or not to change the way council members are elected to serve the citizens of Wayne.

Information was shared that state statues require at least one representative on the council to be from each of the four wards in the city. The remaining representatives could be elected through an at-large system.

Several council members expressed their feelings on the possible change, noting both positive and negative effects of the change.

Council member Jason Karsky said he prefers the current system as he receives calls from constituents in his ward who feel comfortable talking to him.

Council member Matt Eischied said that sometimes citizens will talk to people they feel comfortable with, whether they live in the same ward or not.

Mayor Cale Giese said he felt "having at-large representatives might increase participation because they wouldn't be running against someone already on the council."

Council members noted that ultimately, the decision on whether or not to make the change is up to the voters and more council discussion will take place at a future meeting.

The issue of sales tax took up considerable time at the meeting.

The current one-half cent sales tax used to pay off the swimming pool will come to an end when the bonds for the pool are paid off. It is anticipated this will take place in late 2024 or early 2025.

Additionally, the one cent sales tax, which is used for capital projects and economic development, will sunset in 2024.

The two taxes could be extended and an additional one-half cent tax added with an interlocal agreement from some other entity in the community.

Discussion focused on possible improvements and additions at the Community Activity Center. These could be used by Wayne Community Schools.

City Administrator Wes Blecke shared information on the amount of sales tax revenue currently being collected and told the council that the numbers have been very positive, in part by the fact that the city is now able to capture sales tax from internet sales.

Superintendent of Wayne Community Schools Dr. Mark Lenihan shared information on a facility study that the district began in 2019. It was not completed, due to COVID-19 issues needing attention. He also talked about the district's strategic planning work in the past several months.

"The timing of this does not exactly align with what we, as a board, are talking about right not. But, we know there is a need. The gym at the high school is the busiest classroom in the building," Dr. Lenihan said.

He also said the school board needs to be aware of the impact of any decision on the residents of Carroll and rural taxpayers.

A timeline of what needs to be done if the issue were to be put on the May 2022 primary ballot was shared and discussion also involved other entities the city could partner with in an interlocal agreement.

Representatives of the Community Re-Development Authority (CRA) were on hand at the meeting to discuss goals.

Mike Powicki, a representative of the group, said the group wanted to "be on the same page as the council. We have great momentum and have been very active in the last 12 months in finding areas, both residential and commercial, to re-develop."

He said that the CRA does not want to be property owners for a long period of time. Instead, the group wants to increase the value of the properties and get those that have been idle for a long time back on the tax rolls.

Several maps were shown with possible areas for re-development. This included the half block of Main Street between Seventh and Eighth Street. Currently, there is a commercial building at the corner of Seventh and Main and several houses to the north.

Other areas of potential re-development are from 12th to 13th Street on North Main Street and on East Highway 35 from Ace Hardware to Valley Drive.

In other council action, Resolution 2021-67 was approved. It authorizes the city's participation in the Northeast Nebraska Economic Development District.

The Wayne City Council will next meet in regular session on Tuesday, Dec. 7 at 5:30 p.m. in council chambers.