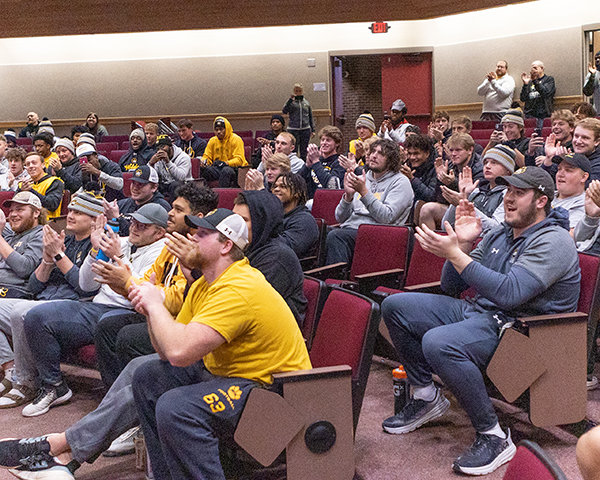 The Wayne State football team applauds after seeing their name show up on the bracket during Sunday’s announcement of the 28-team field for the NCAA Div. II playoffs. The Wildcats are the sixth seed in Super Region 4 and will play at Minnesota State on Saturday.
Michael Carnes
Posted Sunday, November 13, 2022 6:47 pm
Michael Carnes

As the field for the NCAA Div. II football playoffs was being announced, there was a quiet confidence on the face of the Wayne State football players and coaches.

The Wildcats, finishing the 2022 season with a 9-2 record, knew they were going to be part of the 28-team Div. II field. The only two questions left to be answered were: who? and where?

Both were answered with the final pairing in the Super Region 4 field Sunday afternoon, with the team gathered in the main lecture room at Gardner Hall to watch the announcement — the Wildcats will travel to Mankato, Minn., to take on Minnesota State.

Everybody in the room thought Wayne State might face Bemidji State in the first round, but when it was announced that Winona State would travel north, the buzz in the room got a little bit louder. The Minnesota State-Wayne State pairing was the final of the 12 games announced that will be played this Saturday.

Wayne State was the last of the 28 teams announced Sunday afternoon, and that was just fine with coach Logan Masters.

“You just want a chance to get to the table and we’ve got it,” he said after meeting briefly with the team following the announcement. “We didn’t know if we’d be hosting or not, but we’ve got Mankato so we’re going to get ready for them.”

Each of the three first-round games in Super Region 4 are rematches from earlier in the season. The Wayne State-Minnesota State winner will face either Colorado School of Mines or CSU-Pueblo in the regional semifinal on Nov. 26, while the Bemidji-Winona winner faces top-seed Angelo State, who received a first-round bye.

There was a possibility that Wayne State could have hosted a first-round game, as early indications pointed to a matchup with Bemidji State at either location. In spite of the final announcement, Masters said he’s happy with where the team is at in making its first playoff appearance since a 23-17 loss at Chadron State in 2008.

“For us, this is new territory,” he said. “You never know what goes into the selections, things like travel costs and trying to get rematches, and it looks like all three (first-round games) are rematches, so we’re just excited to have a chance.”

Wayne State defeated Minnesota State earlier in the season, posting a wild 41-33 homecoming win at Cunningham Field on Oct. 8. The win was sandwiched around the Wildcats’ two losses this season, 38-14 at Winona State and 31-27 at Augustana.

Team unity has been the secret to this team’s success, Masters said.

Beating a team twice in one season is never an easy task, but Masters feels his team has a chance to get the job done this Saturday.

“We’ve won some big games the last couple of years and they believe they can do it, so there’s no reason why we can’t go and do it again,” he said. “Mankato is always a good football team and they’ve been hot since we played them, so we’ll have to go out and play well and we believe we can do it.”