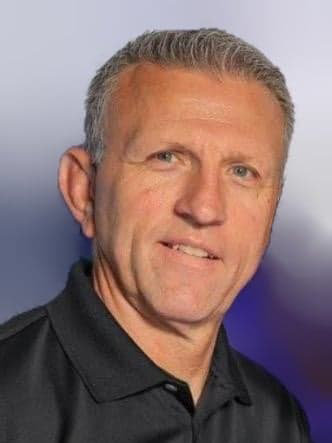 Aaron was born on Oct. 11, 1962 in Creighton. He grew up in Wayne, and was a talented athlete. He participated in both football and wrestling, and immediately upon graduation, he coached at Wayne High School for both sports from 1981-2005. He also coached wrestling at Laurel High School for three years followed by Wayne State College for six years. Aaron loved coaching all of his children throughout their high school years as well. He worked as a truck driver for Nutrina Feed, followed by 31 years at Great Dane Trailers as the Shipping and Receiving Manager. He most recently served as the Facilities Manager at Lone Mountain Truck Leasing.

Aaron married the love of his life, Tamie, in 2007, and the two have lovingly shared the past 15 years together. The couple shared a love of nature and the outdoors, and often enjoyed camping, fishing, and boating. As a fisherman and hunter, Aaron caught a Master Angler Walleye and proudly shot a large 10-point buck. Aaron also enjoyed woodworking, attending Husker wrestling tournaments, and taking annual hunting trips with his son. He was an avid New York Yankees and Husker fan.

Aaron’s dedication and commitment to his family was the cornerstone of his life. His wife, children, and grandchildren cherished his sense of humor, caring manner, and warmth. A man of integrity, he lent a helping hand to whoever needed him and has been described as “all the things we pray our sons will grow up to be.” It isn’t only his friends and family who benefited from his presence in their lives. Innumerable athletes and students profited from his guidance, and his mentorship will continue on in those who were fortunate enough to train under him.

While Aaron will be greatly missed by those who were lucky enough to know and love him, his legacy will live on in his family, friends, and the countless people that were impacted by his presence in their lives. He truly was the epitome of a great man.

Survivors include his wife, Tamie, and his children, Danika (Marie), Dana (Alyssa), Nate (Katie), and Alesha (Chad). He was the proud grandfather of six grandchildren: Alayna, Aaron, Emma, Nolan, Ava, and Bowen. He is also survived by his parents, Myron and Nancy Schuett, and his sisters, Rhonda (Monte) and Robin (John) and 15 nieces and nephews.

He was preceded in death by his grandparents, August and Martha Schuett, and Bernard and Dorothy Norwood.