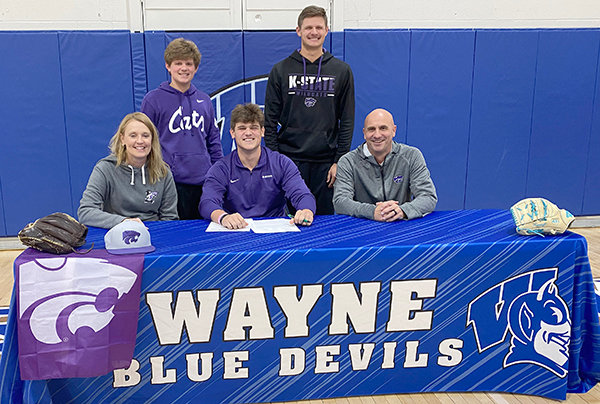 Brooks Kneifl (center) signed a scholarship offer to play baseball at Kansas State University last week. With him are his parents, Jen and Scott, and brothers (back) Jaxon and Jacob.
Photo by Michael Carnes
Posted Wednesday, November 9, 2022 10:21 pm
By MICHAEL CARNES For The Herald

Brooks’ Kneifl’s dad is a Wildcat. So is his older brother, Jacob.

Brooks Kneifl signed a letter of intent Wednesday to take his left-handed pitching talents to Kansas State University, marking the first time a Wayne High baseball player has earned a scholarship from a Div. I school.

The middle son of Scott and Jen Kneifl was all smiles after signing with the Big 12 Conference Wildcats.

“It feels great,” he said. “I’m surrounded by a great community with great teammates and coaches and my family leading me every step of the way. This feels amazing.”

Kneifl has been a force on the mound for the Wayne High baseball team during his first three years, and he had his best season last year, going 5-1 with a 0.52 earned run average in eight appearances and allowing just 10 hits over 39.2 innings with three earned runs, 74 strikeouts and 10 walks.

Knefil pitched the first perfect game in team history last spring, and with a fastball that’s clocked in the upper 80’s, he had a lot of success in helping Wayne to a 13-7 record last spring.

“He comes from the left side and it’s tough to pick up his arm with the way he comes to the plate,” Hoffman said. “He has that overpowering fastball and can come back with a change-up or a curve ball or a slider, and that makes him tough. He’s very competitive on the mound with his aggressive approach.”

Kneifl credits his family with helping him develop his talents — and passion — for the game.

“My dad has always been a great role model to me, and having two brothers to play in the backyard with was a key factor in why I decided on baseball,” Kneifl said, pointing to his dad, the Wayne State volleyball coach, older brother Jacob, a pitcher on the Wayne State baseball team, and younger brother Jaxon, who is in junior high.

Kneifl said that he considered opportunities with several Div. I schools, including Nebraska, Creighton, Wichita State and Kentucky, but fell in love with what he experienced at Kansas State.

“It just feels like a second home for me, and the coaches there are great,” he said. “I feel like I’ll be a great fit for the program. The facilities are outstanding and second to none and I think as a player I’ll fit in well.”

Hoffman said that Kneifl has put a lot of work and effort into reaching this point, something that a lot of people don’t understand when it comes to major college athletics.

“This doesn’t just happen,” he said. “A lot of time and commitment has to go into getting a Div. I scholarship, and when you get there it becomes a job and you breathe it and live it,” he said. “Brooks made a decision early in his life that this is what he wanted and he put in a lot of time and effort in the offseason.”

Kneifl said he is undecided as to what his major will be right now, but would like to get into teaching and coaching.