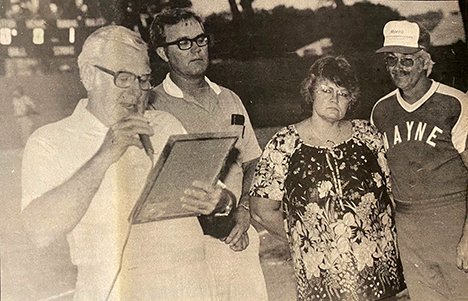 From the August 4, 1982 edition of The Wayne Herald

A smile began to beam on the face of Wayne coach Hank Overin as Mayor Wayne Marsh announces that the Wayne city ball park has been named H. C. "Hank" Overin Field.

The dedication ceremony was held Wednesday between games in the American Legion Area 3 Tournament in Wayne.

The Wayne City Council unanimously passed a resolution Tuesday to name the field in honor of Overin.