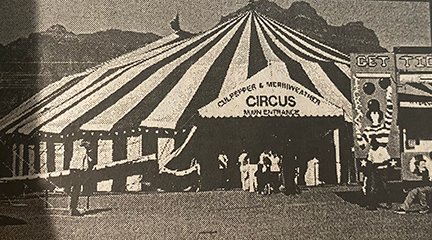 Thanks to the sponsorship of the Wayne Kiwanis Club, Culpepper & Merriweather Circus, an old-fashioned Big Top circus is coming to Wayne on Monday, July 8.

The circus, which will be located at the Wayne County Fairgrounds, will have two scheduled performances, one at 5 p.m. and the other at 7:30 p.m.

This authentic One-Ring, Big Top circus has been featured on National Geographic's Explorer TV Series, Entertainment
Tonight, the Los Angeles Times, the Chicago Tribune and most recently on the A&E Special "Under the Big Top."

This year's lineup included an All-Star group of performers and entertainers including Cheeko the Clown, the Fabulous Tavana Luvas, Suzanne Annette on the Spanish Web, the Amazing Baltista Family and the largest members of the Culpepper & Merriweather Circus Family - African elephants Barbara and Connie.

The public is invited to watch Barbara and Connie erect the Big Top with elephant power during the tent raising at 9 a.m.,
followed by a free Endangered Species Show at 10 a.m.

The Endangered Species Show offers a unique face-to-face opportunity for families, schools, and interested community members to meet and learn about Barbara, Connie and the rest of the animals in the circus family.