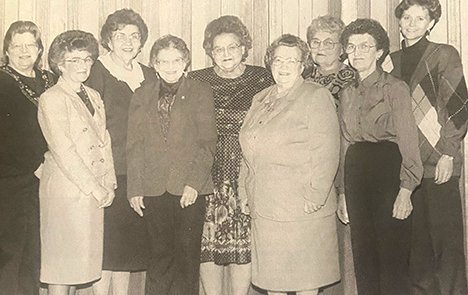 From the November 20, 1992 edition of The Wayne Herald

All eight members of 3 M's (Monday Merry Mothers) Home Extension Club, along with five guests, celebrated the club's 20th anniversary during a dinner on Nov. 16 at the Black Knight in Wayne.

As a community project, members brought items for the Wayne Food Pantry.

Verdina Johs organized and presented a half-hour video of 3 M's Club, including a poster of snapshots and ribbons received for the club's theme booths at the Wayne County Fair, a list of previous members, the original 3 M's charter, the recent Waste Buster award for Lee Larsen's environmental recycling lessons and members' efforts in recycling during 1992, a certificate for attendance at all five leader training sessions in 1992, the book "Shiloh" which was presented by 3 M's to Wayne Public Library in observance of National Children's Book Week and other 3 M's memorabilia.