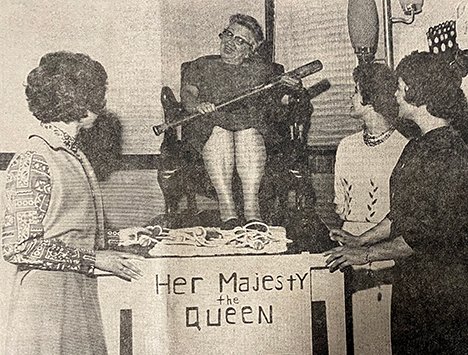 From the September 20, 1962 edition of The Wayne Herald

The fall social season had something new last week at Wayne State as Terrace Hall men staged an all-school party.

Its highlight was selection of the "most aggressive girl" during the dance.

Finally, the names were tossed into a hat, and the winner drawn out.

Master of Ceremonies Harold Larson looked at the name, gulped, and managed to announce the most aggressive "woman"- Mrs. Esther Prather, house mother of Morey Hall.

Queen Esther, chuckling on her throne, received from Ed Humpal a rope ladder souvenir and a baseball bat for a scepter.