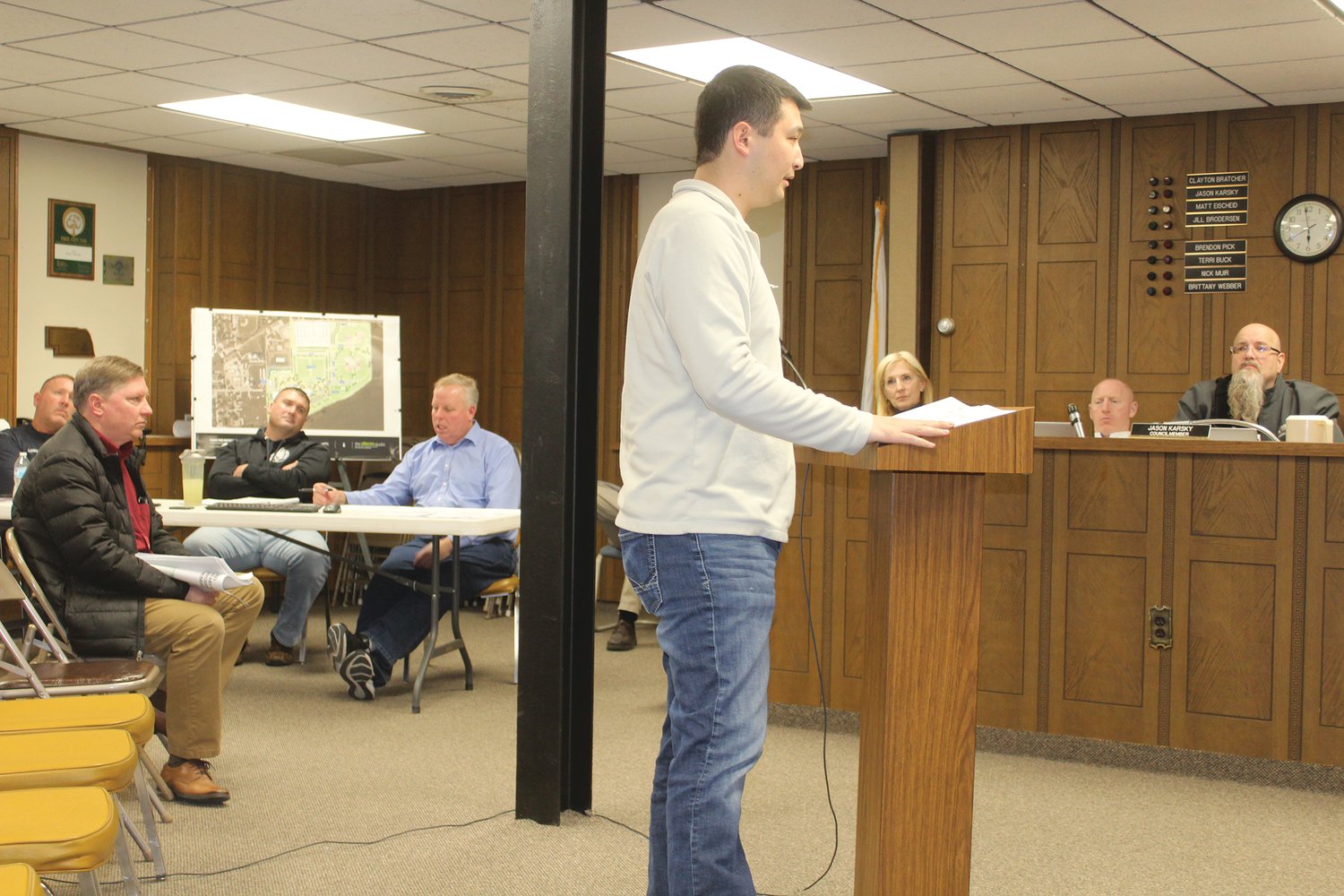 Steps were taken during Tuesday's meeting of the Wayne City Council to move forward with the Prairie Park Project in the southeast portion of Wayne.

Matthew Smith with Olsson, the engineer for the project, shared information on his work with the Stool to Cool Committee, which he said "were awesome to work with."

He talked about the grading that will be done in the area and showed designs for the area. The location of camper pads, restrooms and a Parks & Recreation building were also discussed.

Information was also presented on the water flow through the area

Smith also gave a time for the project, moving forward. He said the project will be bid out in coming weeks, with a bid opening date of Feb. 16. The council could then approve the bids at the Feb. 21 meeting and work could begin in late March or early April. It is anticipated that this portion of the project would be completed in late November.

Cost estimate for the project, which includes grading of the site, graveling of the roads, all the parking lots and the storm sewer pipes, is $2 million. This does not include work on the lake itself.

Resolution 2023-4 was approved It deals with the plans and specifications for the West Third Street Sewer Line Replacement Project.

Roger Protzman with JEO told the council the area involved affects six homes that are serviced by one private sewer line. This project would involve work in an alley in the area and connect these homes to the city's existing line.

Protzman outlined the work that needs to be done and specific costs of the materials needed.

Discussion was held on whether or not the city should pay for the project and City Administrator Wes Blecke said the city is working to "be pro-active and get rid of private lines."

Council members approved Resolution 2023-5 which awards a bid for the Wastewater Treatment Facility Ultraviolet Light Improvements Project to Philip Carkoski Construction and Trenching, Inc. of Loup City. The firm's bid of $334,496 was the lowest and less than the engineer's estimate of $350,000.

Protzman told the council the city has worked with the contractor on previous projects and pleased with the work the firm did.

In other action, council members approved the membership of Riley Prokop to the Wayne Volunteer Fire Department.

Prokop has five years of experience on the Thurston Volunteer Fire Department and moved to Wayne for employment approximately one year ago.

Pay application No. 4 in the amount of $10,773 to OCC Builders, LLC was approved. It is for work completed on the Freedom Park Trailhead Project.

Council member Jill Brodersen, who serves as architect for the project, gave an update on the work that has been completed and plans for coming weeks. She noted that there have been some delays in obtaining materials.

Bids were accepted for the purchase of a Bobcat Compact Track Loader and Skid Steer Grader for the city's Street Department.

Joel Hansen explained the work his department has done in trying to obtain a piece of equipment to replace a 1975 Fiat Allis maintainer. He said there are no similar maintainers in the area, and should the city attempt to purchase one, they would have to travel to Florida or Texas.

Hansen shared the benefits of purchasing the Bobcat piece of equipment, including the fact that several of the attachments already owned by the city could be used.

"We feel like this is a better option and gives us more flexibility. There is lots of potential for uses for this piece of equipment," Hansen said.

It is estimated that delivery of the machine will take four to six months.

An update was given on the Ameritas Life Insurance property.

City Attorney Amy Miller told the council that the city is set to close on the purchase at the end of this month.

Council members talked about the city's responsibility in regard to the parking lot located on Logan Street. Several options were discussed and additional discussion will be held in the future.

Blecke told the council he will be meeting informally with two architects to determine possible options for the renovation of the building.

A public hearing was held in regard to the acquisition of 79.113 acres of real estate currently owned by Pick, Brendon L. and Karla K. Otte-Pick, Steven B. and Cynthia J. Meyer and Mark and Lona Meyer.

The acquisition is contingent upon the city receiving a Community Development Block Grant.

The city will be submitting the $1 million grant application this week to assist with the development of the area northwest of the Western Ridge development areas.

Wayne Area Economic Development Executive Director Luke Virgil told the council that housing was discussed at the council's last retreat and "there is an urgent need for housing in Wayne."

A portion of the area has already been designated as eligible for Tax Increment Financing to assist with the development.

Following the public hearing, the council, with the exception of Council member Brent Pick, went into executive session to discuss the purchase of the property.