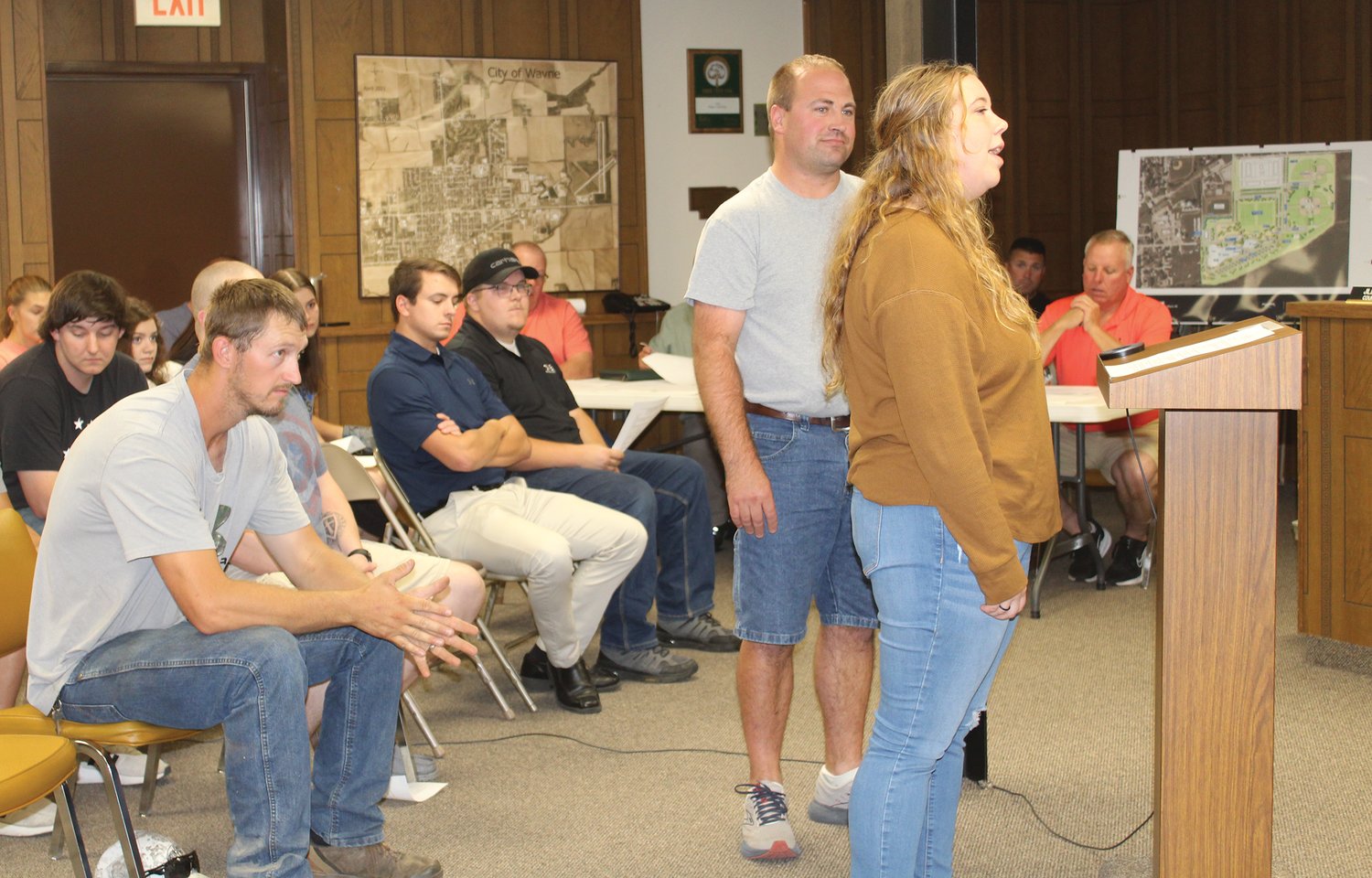 A public hearing  in regard to the purchase of real estate was among the items Wayne City Council's agenda.

Following the public hearing, council members went into executive session to discuss the possible purchase of these two properties.

After 45 minutes of debate, council members voted to contact an engineer to determine the cost of remodeling versus the cost of building a new building.

Council members rescinded a 2021 resolution in regard to the purchase of a vehicle for the Wayne Police Department and replaced it with Resolution 2022-62, which approves the specifications and authorizes the purchase of a 2023 Chevrolet Tahoe through the state bid system.

Police Chief Marlen Chinn said the original order had been canceled by the factory and this vehicle came available after another agency turned it down. Chinn said it could take six months to a year to build this vehicle.

A second resolution was also approved for a vehicle for the police department.

This resolution approves the specifications and authorizes the purchase of a 2023 Ford Explorer through the state bid system.

Both are being purchased through Sid Dillon Fleet.

Considerable time was spent debating the area that would be affected by a parking ordinance in the southwest quadrant of the city.

Ordinance 2022-17 prohibits parking from midnight to 5 a.m. on Chicago Street and South Lincoln and received final approval at the meeting.

Debate centered on whether or not to include several blocks of Lincoln Street in the ordinance.

City Planner Joel Hansen and Police Chief Chinn spoke to the council on an area in which vehicles are parked on the street for a considerable length of time. This makes it difficult for city crews to clean streets in the area.

Information was shared on a possible agreement between the Wayne Community Schools and the city of Wayne in regard to the Community Activity Center (CAC).

Council member Matt Eischied, a member of the Facilities Committee, told the council that the group had met with school officials on options such as selling the CAC or partnering with the school on using the facility.

Eischied said among the concerns with the issue was what the city would do if the school purchases the CAC and the swimming pool as the school has no interest in running it.

Discussion included the fact that a number of upgrades are needed to the CAC and where another facility could be built if the current building is sold.

Council member Chris Woehler said he was against selling the CAC as it was paid for with city sales tax and would "cost lots more to build a new one."

Mayor Cale Giese said among his concerns was what would happen to city recreation programs should the building be sold.

Following Tuesday's discussion, the council indicated they would be willing to continue discussion with the district.

"This is so complicated. There is no easy solution," Eischied said.

In other action, applications from Anaka Brasch and Travis Rasmussen were approved for membership on the Wayne Volunteer Fire Department.

Brasch, a Wayne High School graduate, is currently a Wayne State College student and told council members she "wants to give back to her community."

Rasmussen has previously been a member of the Falls City Fire Department and now that he is employed in Wayne is able to serve on Wayne department.

The two new members bring the number of volunteers on the Wayne department to 28.

Ordinance 2022-19 was approved on first reading. It authorizes the release and abandonment of a 14 foot utility easement between two lots in Vintage Hill Third Addition.

Nick Junck made the request to the city as he plans to build a house on the two lots. City staff said there are no existing utilities on the property.

A contractor's application for payment in the amount of $3,508.62 to Kay Contracting, Inc. for the 2022 Golf Course Sanitary Sewer Extension Replacement Project. Also approved was the certificate of substantial completion for the project.

A pay application in the amount of $12,442.00 to OCC Builders, LLC was approved. It is for work done on the Freedom Park Trailhead Project.

Also approved was a Certificate of Payment No. 4 in the amount of $273,176.69 to Robert Woehler & Sons Construction, Inc. for the Chicago Street Improvement Project. City staff reported that storm sewer has been installed and street paving is more than half completed. Several changes had to be made with the project and it is anticipated that it will take two to three weeks before the pedestrian trail is re-opened in that area.

City Attorney Amy Miller told the council there are no updates in regard to the Bradley J. Woehler and Bradley F. Roberts vs. the City of Wayne litigation matter.

The Wayne City Council will next meet in regular session on Tuesday, Oct. 4 at 5:30 p.m.