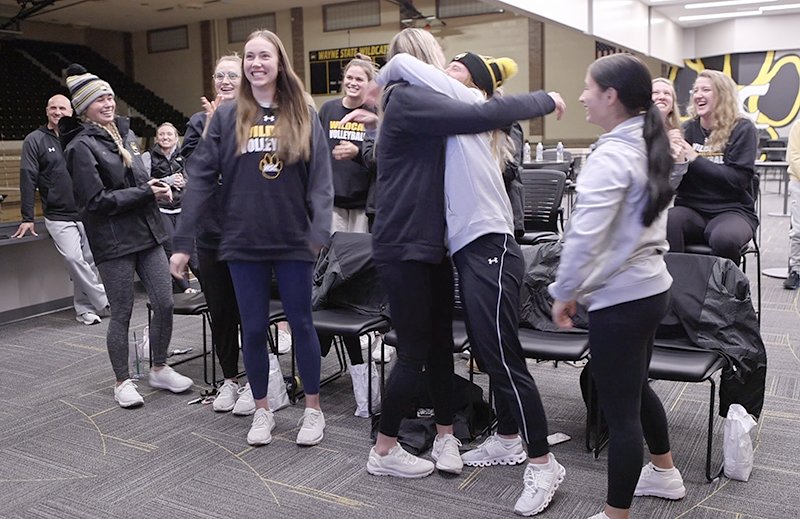 Members of the Wayne State volleyball react after being named host for the NCAA Div. II Central Region volleyball tournament. It is the first time the Wildcats have hosted the regional, which begins Friday at Rice Auditorium.
Michael Carnes
Posted Sunday, November 13, 2022 11:54 pm
Michael Carnes

For local volleyball fans who have yet to experience watching the Nebraska Cornhusker volleyball team in action, this weekend will undoubtedly be the next best thing.

Eight of the top Div II teams in the nation will descend on Rice Auditorium this weekend for the NCAA Div. II Central Regional tournament, and for the first time in program history, the Wildcats will get to host the tournament.

The eight-team regional that begins Friday will have a definite championship flavor to it, considering that six of the the top 10 teams in the final regular-season American Volleyball Coaches Association’s coaches poll are from this region. In addition, 13 of the last 16 championship matches have included a team from the Central Region (not including 2020, which was cancelled due to Covid).

The announcement was made by the NCAA late Sunday night as the team and a few onlookers watched from the Cat Club box inside Rice Auditorium. Wayne State will play Great American Conference champion Harding in the opening round on Friday.

“It’s extremely exciting,” Wayne State coach Scott Kneifl said after the announcement. “It’s something we’ve been hoping to do all season and it was a goal we had and one we’ve achieved, and now we want to get this ol’ barn rockin’.”

The Wildcats have had an outstanding 2022 season, posting a 29-2 record heading into the NCAA tournament. They started the year winning their first 24 matches, including a pair of wins over perennial Northern Sun Conference power Concordia-St. Paul, before losing on the road at Southwest Minnesota State in early October. They won their final five matches to finish 17-3 in the NSIC and lay claim to the regular-season title before being upset in the first round of the conference tournament Friday by Augustana.

While the loss came at a bad time, WSC’s strength of schedule was more than enough to carry it through to being the top-seed and tournament host.

“You never want to lose and we’ve been fortunate to have won a lot of games this season,” he said. “(The Augustana loss) was just one of those things where they played extremely well and we came up short, but a new season starts today.”

Some unexpected upsets made for an interesting announcement as the Central Region bracket’s teams were announced.

Washburn, which finished fifth in the MIAA in the regular season, upset regular-season champs Northwest Missouri State and perennial national contender Nebraska-Kearney to earn one of the three automatic bids.

St. Cloud State, which came into the NSIC tournament as the fifth seed, upset fourth-seed Southwest Minnesota State in the first round, then beat Augustana before knocking off second seed and No. 3-ranked Concordia-St. Paul to claim another automatic bid, which ultimately pushed SWMS, ranked No. 7 in the final AVCA coaches poll, out of the tournament.

The third automatic qualifier was Great American Conference champion Harding, who the Wildcats will face in the first round. The winner will see either fourth seed Northwest Missouri State or fifth seed St. Cloud State, with the other half other bracket including No. 2 Concordia-St. Paul against No. 7 Nebraska-Kearney and No. 3 Minnesota Duluth facing No. 6 Washburn.

“It’s an Elite Eight kind of atmosphere,” Kneifl said of the loaded field coming to Wayne this week. “Every team in this region is capable of winning a national title, and it’s going to come down to who gets hot at the right time.”

Kneifl said he likes the way the bracket is set up, facing Harding for the first time this season.

“We love the bracket,” he said. “Playing someone we haven’t played all year is exciting for us. We’re excited to be hosting and to get this thing going.”