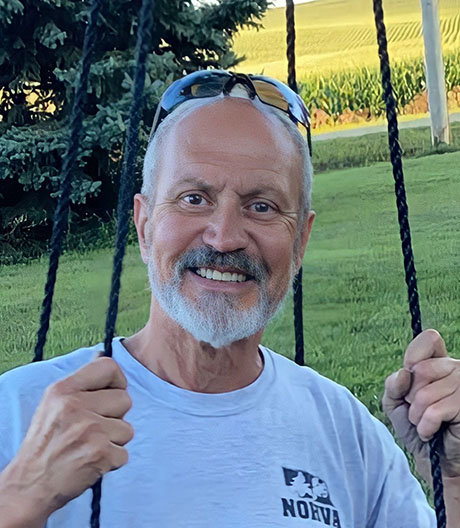 David Alan Lunz, 63, of Wakefield, died Thursday, Jan. 5, 2023, surrounded by his family at his home in Wakefield.

Bressler - Munderloh - Smith Funeral Home of Wakefield is handling the arrangements.  Memorials are suggested to the family for future designation.

David Alan Lunz was born Sept. 29, 1959 in Sioux City, Iowa to LeRoy and Betty (Jeffrey) Lunz.  His early years were spent in Allen working on his family’s dairy farm. He moved with his family to a farm north of Wakefield, graduating from high school in 1978. After high school, Dave enlisted in the Army, serving in Fort Knox, Kentucky and Panama. After discharge, he earned an associate’s degree in motorcycle mechanics from Southeast Community College in Lincoln. Dave married Jennie Pethoud in 1984, moved to Kearney and had three children, Anthony, Jessica and Ashley. In the late 1980’s, they moved back to Wakefield to be closer to family. He worked at Great Dane Trailers for 31 years before taking early retirement. After retirement, he was employed with Wakefield Community Schools assisting in the kitchen where he enjoyed seeing two of his granddaughters daily and was well known to all the students as “Grandpa Dave.” Dave had a special way of connecting with kids, taking time to get to know many and was known to wipe away occasional tears.

Dave was proud of his years of military service and supported Veterans. He was a devoted Christian, an active member and elder at St. John’s Lutheran Church. Dave was a guy that liked to stay busy. In his early years, Dave enjoyed racing motorcycles at the regional racetracks with his son Anthony. Repairing, restoring and riding motorcycles always brought Dave great joy and pride. He enjoyed many road trips, often stopping to snap beautiful photos of scenery to share with his family. He had an eye for photography, loved the arts, music, nature and animals, especially his cat, Jazzy. He looked after his neighbors and loved to visit the elderly in the community and at the nursing home. Above all else, Dave enjoyed spending time with his grandkids. You would often see Dave cruising the bike trail with them. Dave will be remembered as a kind and generous person to everyone he encountered.

He was proceeded in death by his parents, LeRoy and Betty Lunz.