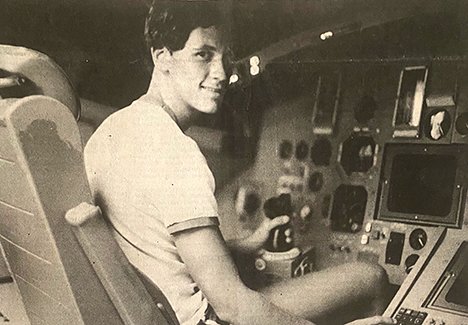 From the November 18, 1982 edition of The Wayne Herald

As a kid, Roger Wacker always wanted to be an astronaut.

Though he has yet to don a spacesuit, the childhood dream has launched the 23-year-old Wayne native into an aerospace career.

In fact, it has propelled the 1977 Wayne High School graduate into a space right next door to Houston's Mission Control for the National Aeronautics and Space Administration's fifth shuttle flight.

Wacker, the son of Herman (Bud) and Rodella Wacker of Wayne, joined the cheers and applause at 8:33 a.m. Tuesday.

That's when Columbia touched down on schedule to end its five-day space excursion at Edwards Air Force Base in California.

The re-entry - from deorbit to touchdown- that was the real-time thing for young Wacker, who has worked for several months with a McDonnell-Douglas flight control entry crew in the subcontracting company's engineering and development division.

"It was perfect...a perfect landing... everything went just as planned," Wacker told The Wayne Herald Tuesday morning, only 90 minutes after the crew brought the Columbia safely home from its first commercial flight.