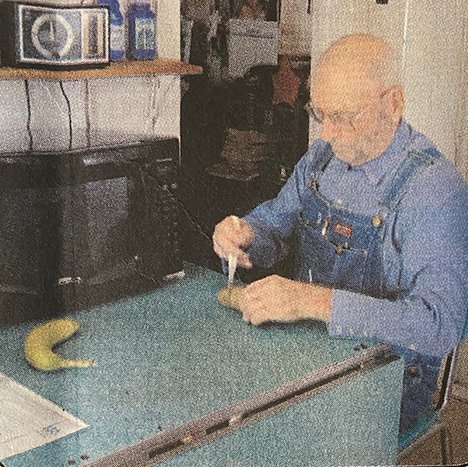 From the September 19, 2002 edition of The Wayne Herald

For anyone, living to be 100 years old is quite an accomplishment.

But, for Willie C. Kay, who will observe his 100th birthday on Sept. 19, this is even more impressive because he lives alone in his own house southeast of Wayne and for the most part, takes care of himself without a lot of help.

Willie was oldest of four sons born to August and Martha Kay. He is the only one left, as one of his brothers died of polio when he was 2 1/2 years old and his brothers John and Rudolph have also died.

"When I was two years old, my parents bought this farm from my grandparents and I have lived on the same place for the past 97 years," Willie said.

Kay remembers attending District 47 for schooling. Although he attended school until he was 17 years old, he never got through the seventh grade because after he was 12 years old, Willie only went to school in the winter months and stayed home to help on the farm during the rest of the school year.

Willie intends to remain in his own home as long as possible, although he does acknowledge that living in a nursing home may be a possibility.

"I don't know how much longer I will live. I just take care of myself and take one day at a time."