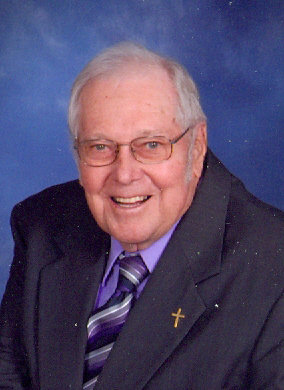 Funeral services with military rites were held Friday, Aug. 12 at Grace Lutheran Church  in Wayne. Burial will in Veterans Memorial Cemetery in Wayne at a later date.

Merlin L. Frevert was born Feb. 1, 1926 on a farm in Wayne County to Ernest and Anna (Brummond) Frevert.He was baptized and confirmed at St. Paul's Lutheran Church southwest of Wakefield. Merlin graduated from Wayne High School in 1943 and served in the United States Army Air Corp from 1945 to 1946. While he was stationed in Germany, he attended the Nuremberg War Trials and spent three years in the reserves after his deployment. Merlin and Kathleen Echtenkamp were married Jan. 27, 1957. He farmed and later worked at Wayne State College from 1970 to 1990 and was a part time bus driver. Merlin was a salesman and on the board of directors for Northern Nebraska Insurance Company of Plainview for over 50 years. He was also a member of the Natural Resources District for 12 years. They were members of St. Paul’s Lutheran Church in Wakefield and Grace Lutheran Church in Wayne. Merlin was a member of the American Legion and Veterans of Foreign Wars.  Merlin’s greatest passion was his family and he was always ready for a game of cards.

He was preceded in death by his parents; brother Glen (Bonnie) Frevert and sister, Ruth (Wendell) Korth.